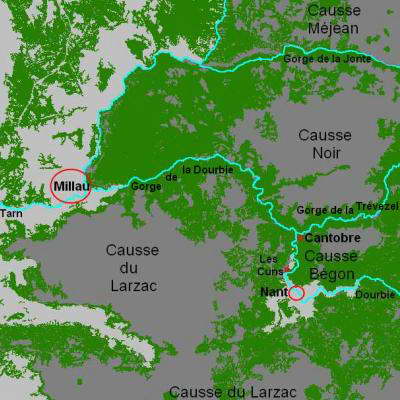 Perched on the top of its rock at about 550 metres above sea level, the small fortified village of Cantobre is ideally situated to monitor and control the confluence of the Dourbie and Trévezel valleys 100 metres below.
The two valleys mark the edges of the three high limestone plateaux (causse) about 200 metres above us.
Historically, culturally and economically, the most important of these is the Causse du Larzac to the south and west, this was the home of The Knights Templar in the 12th and 13th centuries.
To the north, and reaching as far as the Jonte valley is the Causse Noir, and to the east the Causse Bégon (we are probably the western most finger of this causse).

Origins Of The Name

There are two theories for the origin of the name: the Celtic one of Canto Briga meaning the shiny citadel (possibly from the way the sunlight shines on the rocks), or one from the Knights Templar who, back then, colonized the Larzac and helped the Roquefeuil family to build a powerful castle. Quant Obra!, they allegedly exclaimed – Beautiful work! It's more likely to be the Celtic name as it was already called Cantobre before the Roquefeuil family bought the title!

Apart from stone age man who may have wandered by a few times, it appears that the first recorded habitation of Cantobre was by the Gauls (late iron age Celts) and then sometime later around the 5th century by the Romans. Other early gatecrashers at the party may also have been Visigoths, Saracens and Ruthenians. It’s not clear exactly what was here until towards the 14th century as early references to the Château were probably to the whole of the fortified village that would have contained smaller houses and of course the church.

By early in the 11th century Cantobre was already a seat of justice and it appears that by the middle of that century the first Lords of Cantobre may have been two brothers called Galtier.
The beginning of the 12th century has Pope Innocent II having the church St-Etienne de Cantobre built and by the end of the century the property and title of Cantobre had made its way into the hands of Guillaume de Cantobre whose real name was probably Guillaume Metge (translated as Médici).
At the beginning of the 13th century (1213) records show that Guillaume’s son Azémard Guillaume de Cantobre sold it to Arnaud de Roquefeuil who with his Knights Templar connections is said to have built a powerful castle at Cantobre (although this may still be a reference to the whole of the fortified village). The Roquefeuils had four or five other châteaux at this time so Cantobre was a secondary title for them.
It’s probable that around this time that the inhabitants of Cantobre and hamlets up the Trévezel valley may have been involved in silver mining. So, by the 14th century I’ve given up the will to live. It seems that the Roquefeuil family (possibly with the intervention of the Médicis) continued with the title being held by various branches of the family until sometime towards the end of the 15th century. As was common place at the time (and still is), money marries into money and local families combine to strengthen (economically if not genetically). One of the more notable users of the name de Cantobre (although probably not a Lord of Cantobre) was His Eminence Gilbert de Cantobre, who was appointed Bishop of Rodez in 1339, died 10 years later and was buried in its cathedral.

Jumping to the end of the 15th century where recorded history (and me) seems to have recovered its sanity we find Eléonor Azemar (a possible descendant of Azémard Guillaume de Cantobre) marrying Jaques de Fombesse. The Fombesse family title had previously been de Vellas which is another local title (the family tomb is just down the road at Les Cuns) but they chose to take up the new title of de Cantobre.
At the start of the religious wars in the second half of the 16th century the Huguenots ousted the Fombesse family from Cantobre but the village was later taken back by the Catholics who placed a garrison here. In the 13th century The Lords of Cantobre had owned an iron foundry further up the Dourbie valley; but it seems it was only now that coal (lignite) was mined nearby.

The Fombesse family returned but by the 17th century it seems that the château was not in a good state and Jean de Fombesse took to crime. He was found guilty of making false money, rape and even two murders and was beheaded in 1677 (after being made to watch as his castle was razed to the ground).
Subsequently, from the beginning of the 18th century all the way to the French revolution (1789), the title belonged to the family of Picapère, (magistrates) from Nant. Following the revolution and the division and disposal of the estate, we can consider the heraldic title of Cantobre to have passed into history.

Coal mining continues into the 19th century and the construction of a school house started in 1855. The village was literally deserted by its inhabitants after the Great War (1918) and remained in ruin until the end of the 60s when it was gradually rebuilt by the miners' families and also foreigners who bought into Cantobre. The village has regained most of its past splendour, although it still needs a bit of polishing to regain its full shine!